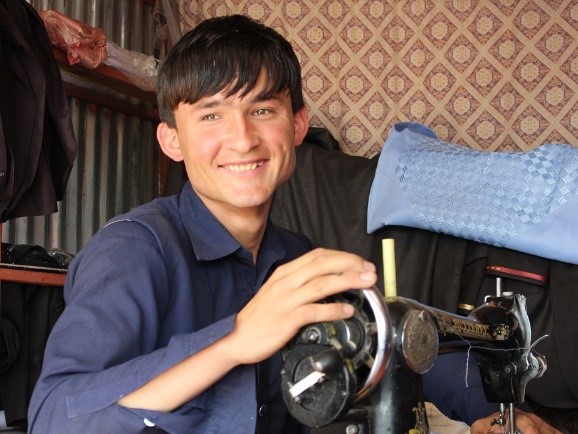 In a remote Makhmal Basi village at Rustaq district of Takhar province a person apparently with half a body would like to be the agent of change both in his life and his community by moving his wheelchair forward. He is now eighteen and when he was two years, he got paralyzed due to polio.

When Farooq, a staff member of education program at north-eastern regional management office first visited Abdul Qayom in his village, he asked the people of the village to enroll Abdul Qayom at school. However, everyone laughed at his suggestion since the route leading to school is unpaved and they thought it would be impossible to pass for a person with disability.

In spite of the challenges and doubts, Abdul Qayom wanted to overcome all the challenges with a full passion and turn them into means of improvement of his life. He finally managed to start his preliminary education in the school run by SCA in his village by riding a donkey. After completing his intermediate education at that school, he is now pursuing education in a high school at Rustaq district and showing everyone that disability is not inability.

“Before, people of the village was judging me as an incapable person, but I was waiting for opportunities and never thought of myself as a disabled person. I eventually got the opportunities through SCA and enrolled at school,” said Abdul Qayom.

Besides attending school, he has managed to attend vocational training conducted by SCA for the empowerment of vulnerable people and there he learned tailoring with much creativity and perseverance.

“SCA did not only pave the way for my schooling and my mobility by giving me the wheelchair, but they also provided me with a chance to learn a profession and generate an income. I have a tailoring shop now through which I am able to pay the living expenses for both myself and my family,” added Abdul Qayom.

Despite the fact that Abdul Qayoom is suffering economic problems, he refrains the interest free loans provided by SCA since he wants himself to be an investment maker. “I have to be able to make large capitals out of small ones and avoid getting used to supports and loans because the secret for my success relies upon how I decide,” he pointed out.

Pursuing education so he could be able to better serve his family and his country is the biggest dream of Abdul Qayom. He thanks SCA for all the support he has received and he does not feel isolated when he has SCA by his side.