Quality education plays an essential role in the development of rural communities. Construction of a local school in the Weerouf village of Warsaj district of Takhar province plays a vital role in the improvement of literacy, reduction of violence against women and enabling a good family environment.

Imammuddin, council chairman for Weerouf and Dani Dara villages, says, “before the construction of the local school in these villages, only 15 of the residents were literate and the rest of people were not, but today, after 14 years of establishment of this school, 90 percent of the population, especially the young people are literate and they are students in high schools and universities.

He added: “now our people have recognized the importance of school in the village and, for supporting and maintenance of the school they have formed two committees.” 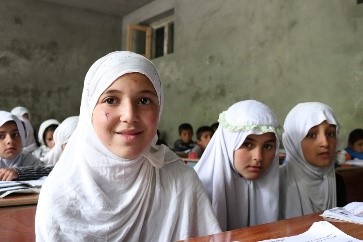 In an interview with some people in these villages, they say, this school has increased the solidarity and collaboration of the four villages and plays the role of the leading center for our people.

The main reason for the construction of this school by the Rural Development Program of the Swedish Committee for Afghanistan is to remove the challenges faced by students in this area.

Najmuddin headmaster of the school, says, “all the women living in these four villages were illiterate, and out of four hundred families, only 15 men were able to read and write, and the other people were totally illiterate; at first, no family allowed their girls to go to school. but, when the Weerouf Community based school established in this village, most of the families agreed to send their daughters to school.

Construction of this school building has increased the numbers of students. At the beginning of this year, the figures for students were 206 and now it has increased to 236 students.

“We did not have proper classes, we studied under the tents or outdoors, we had to go under the tents during the rainfall, reading in a cold place was very difficult. Now I am very happy to have a classroom, a desk, we have books, and our school has a boundary wall now” said Nasrin daughter of Qeyamuddin, a student at the Weerouf school.

Engineer Hashmatullah Mohmand, an employee of the Rural Development Department of the Taloqan Regional management Office says: “The Weerouf School building has been built with education standards and has 6 classrooms, 2 office rooms, and one storage room. This school has a capacity of 270 students at one time. The construction is completed in 7 months.”

The cost of construction of this school is nine million and two hundred thousand Afghanis, which has been implemented by the Swedish Committee for Afghanistan and donated by the British Charity Budget. The cost of buying land has been paid by the local people.

It is worth mentioning that until now 25,850 students are in 210 locations covered by the Education Programme of Taloqan Regional Management Office of the Swedish Committee for Afghanistan. 6574 teachers have received vocational training over the past few years, and 148 teachers will be given training in 2019. So far, 8358 students have been transferred to state schools, and 3835 other students are expected to be transferred to state schools after the end of the year.