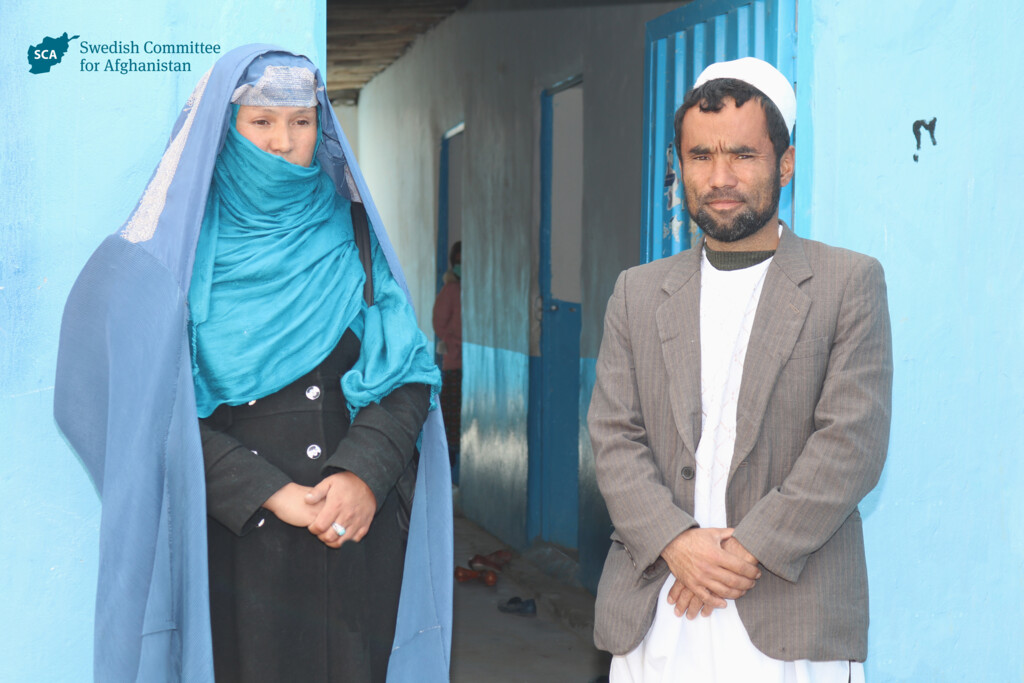 Bibi Zada and her husband are originally from the Turkmen tribe of Afghanistan and both have graduated from the TTC (Teachers’ Training College) in Parwan province and it has been about nine months since they were appointed by the Swedish Committee for Afghanistan as teachers at Noorania Secondary School in central Sharana. This is the girls-only secondary school established by the Swedish Committee for Afghanistan in the year 2006 and currently, girls are studying up to ninth grade in this school. It is the only special school for girls in central Sharana.

The headmaster of this school, Mr. Noor Mohammad Khan said “The cultural problem faced by the locals was also solved with the arrival of this female teacher. Now all the parents are happy that a female teacher has been hired in this school. As well as with their arrival, the number of new students in our school has also increased”.

SCA’s regional office in Ghazni has also offered her husband, Mohammad Yousuf, the opportunity to work as a teacher to facilitate Bibi Zada to serve the community in a safe environment.

Bibi Zada said “I came here from Parwan province to serve my people and I love my profession and students so much; my only hope is that Noorania school is to upgrade to a high school because the girls in this school are very worried and say our school should be supported by the SCA in addition to the upgrading. We could find teaching positions anywhere but we chose Paktika to serve people in need”.

They also voluntarily teach Noorania’s school students during the winter season and in the summer, according to the plan, she is responsible for teaching senior grade school girls, which also proves their interest and commitment.

Bibi Zada’s husband, Mr. Mohammad Yusuf, said “We are all one nation. There are many cultural restrictions in Paktika province. I am very familiar with this area so I wanted to bring my wife here and we both serve in this school because countrymen have the rights on us and we are really happy here too”.

Noorania school is the only school in central Sharana that nearly 290 girls are studying till the ninth grade and is strongly supported by the residents such as last year, Mr. Mia Khan was one of the parents of the students in the same school who brought his three daughters to this school for studying, 12 kilometers away from the school building. Mia Khan received the title of a good father.