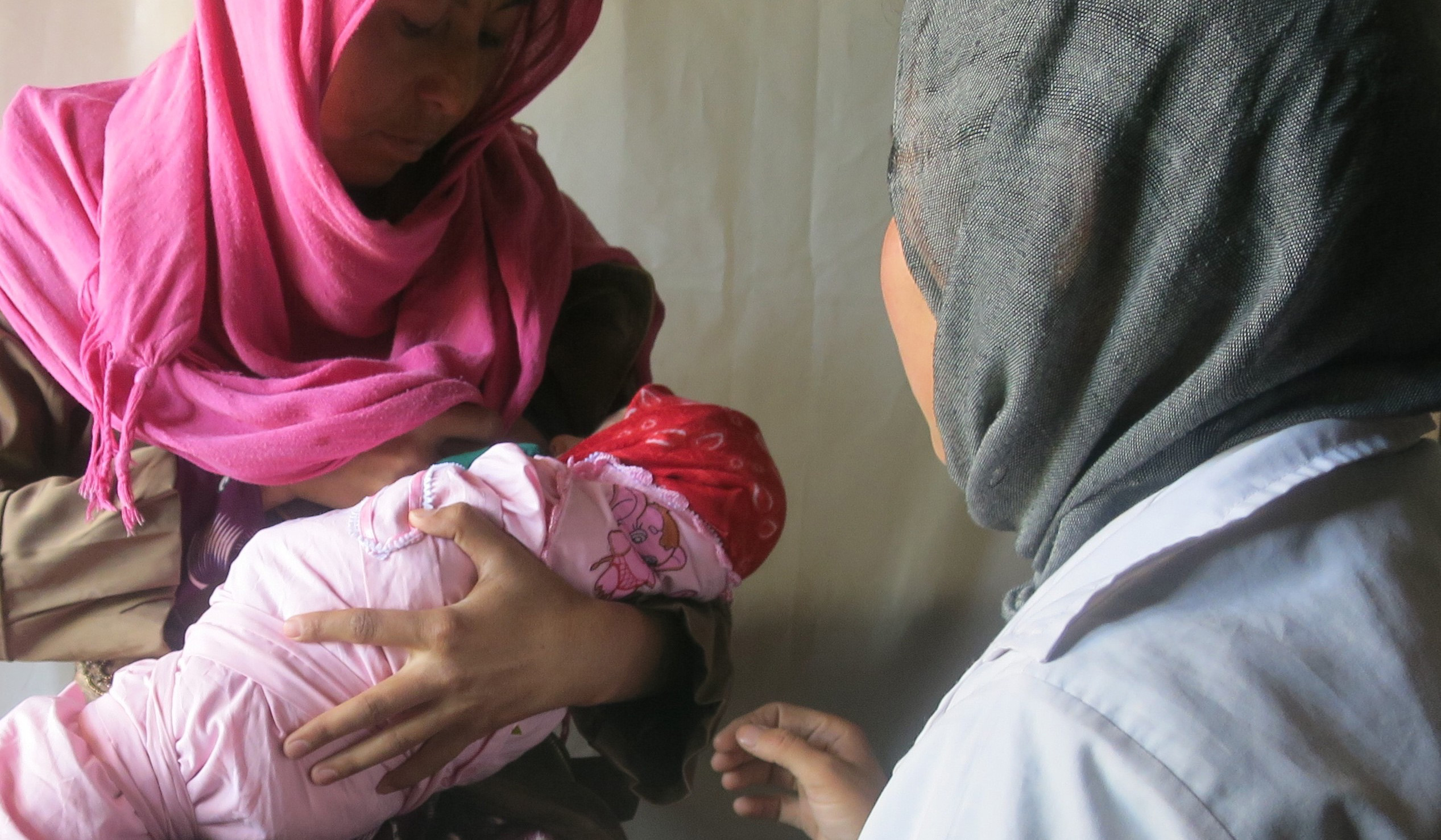 Maryam bagan her midwife training at the Swedish Committee for Afghanistan in 2010. The time since then has been dramatic, as the Taliban have taken over the countryside step by step. Maryam, who comes from a small village in the province of Samangan, now works as a midwife at the front line. The clinic where she works is often closed due to combat.

I meet Maryam again at the end of February. The last time was almost three years ago. Just as the last time, we meet in Mazar-e Sharif, to which she has travelled for eight hours together with her husband and their youngest son, only 18 months old. Their remote village is covered in deep snow and finding a car has been difficult.

There are many checkpoints along the dangerous road, where the Taliban demand to check the cellphones of those passing through. They want to see whether there are inappropriate images or phone numbers. I would prefer to visit Maryam in her home village, but this is impossible due to the risk of kidnapping.

There has been serious fighting between government troops and Taliban forces during the last few months. The Taliban stop coal transports, kill drivers, burn cars and destroy checkpoints. They raise different forms of taxes.

Maryam, who today works at a government-funded clinic, must pay the Taliban 5,000–6,000 afghani per month to be allowed to work. Her total salary is 35,000. Control is gradually increasing. A vaccine administrator in her clinic gave the Taliban a tip that she had photographed and interviewed women. She has now been asked to stop doing this.

Her husband and children have not been able to stay in their village for long periods of time. Other villagers have demanded that her husband join the battle against the Taliban, but he has not wanted to do that. Or dared.

During the twenty days when her clinic was closed due to intense fighting, Maryam received 240 patients in her own home, which does not have any electricity or running water. Not only pregnant women came to see her but also patients injured in the fighting. She had to act as a doctor and take care of children, women and elderly people with gunshot wounds.

Recently, the Taliban demanded that Maryam should pay them more taxes when treating patients in her home. Her stories are dramatic.

“One woman, who had previously lost two children, travelled to me for twelve hours to give birth. She gave birth to a son and was to receive some postnatal care. But she was kidnapped by the Taliban, who demanded – and received – money to release her.”

On average, Maryam assists ten women a month giving birth. She has saved many lives during her seven years in the profession.

“Being a midwife is a sacred job. I am proud to work with the community and the people,” says Maryam.

“Sometimes I am tired and my family tells me that I need to rest. But I don’t have the time.”

Instead, she continues her work to disseminate knowledge about healthcare to the poorest. And sees results. Those coming from remote villages now want advice on how they may take care of their children and themselves.

“It used to be that losing one or more children was considered normal. These days, they value their children more,” says Maryam.

People’s awareness regarding health has increased. Women no longer use water from ditches but are careful to get clean water from the pump. There is also more interest in contraception.

“Explain to us what to do in order not to get pregnant again, they ask me.”

Still, however, approximately twenty percent of the women who come to Maryam have complications from having gotten pregnant too quickly after giving birth. The man wants a son at any cost, but he is selfish,” says Maryam.

Maryam and her family face many challenges as a result of the war and the security situation. How are her four children to get a good education? How is her husband to be able to work as a teacher again? How is she to develop in her profession? Her childhood dream is to study to become a doctor. Maryam’s hopes for the future rest not only in her own hands but also – not least – in the great, brutal game over power in Afghanistan.

Midwives are important for women’s health

Maternal mortality rates are gradually decreasing in Afghanistan but are still
among the highest in the world. A total of 369 women die per 100,000 births,
compared to four women in Sweden.

One reason why women do not have access to healthcare is the massive shortage of trained female healthcare workers. In order to address this, SCA operates schools for midwives and nurses. These women study for a period of two years, after which they return to the area from which they came, hired as midwives or nurses by SCA or other organizations in their community. Since 2004, 328 midwives have graduated from SCA’s schools. The majority work at SCA’s clinics, where there would not otherwise be any maternal care.